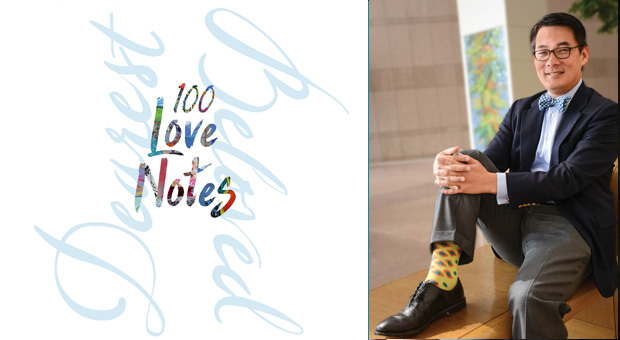 Flying socks, Spanish anchovies, origami butterflies, and tarot cards comprise just a small part of the collaborative efforts that produced 100 Love Notes, the book. Here, author Hyong Yi and the 17 artists he commissioned to illustrate his 100 three-line poems share some of the insights behind their work. Together, they have illuminated a story that captured the hearts of people around the world, giving it even greater meaning and purpose.

The initial version of Hyong Yi’s 100 Love Notes launched on the streets of Charlotte, North Carolina on November 21, 2015. To honor his wife, Catherine Zanga, on the one-year anniversary of her death from ovarian cancer, Hyong and his two young children gave strangers 100 handwritten love notes, notes that chronicled Hyong and Catherine’s life together, from their first meeting, to dating, marriage, children, and her death, which came far too soon.

Surprised by the magnitude of interest, Yi realized that the notes had greater purpose, and he commissioned 17 artists to illustrate his three-line poems. The resulting art runs the gamut from watercolor, to pen and ink, mosaic, and collage; from traditional paintings to digital compositions.