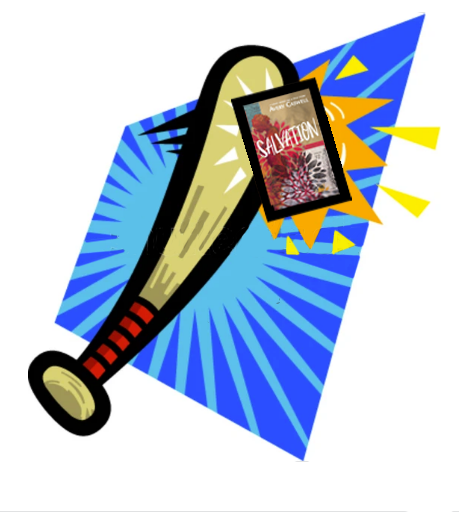 Swinging For The Fences

MAYBE because I read everything sports columnist Jason Gay writes, or maybe it’s seeing Cam Newton back in a Panther’s jersey, but for whatever reason, I find myself waxing sports-etic lately.

Taking a cue from Wayne Gretzky who said: “You miss 100% of the shots you don’t take” (and mixing sports metaphors) Earthell and I are teeing up dozens of shots—sending copies of Salvation to heavy hitters in the media, news, and entertainment industries.

We drafted this idea after seeing a profile of author and Top Chef host Padma Lakshmi. When a reporter asked what she was reading, she mentioned Code Name Madeleine, a book by Arthur Magida. Earlier this year, Arthur had the notion that this Indian American goddess might be interested in his story about a Sufi princess so he sent her a copy.

Ingram, the major distributor of print books, has yet to put Salvation in their lineup. Consequently, bookstores aren’t stocking it. The book is available on Amazon (YAY, Amazon!), but a lot of people still haven’t heard about it. YET.

Taking a page from Arthur’s playbook, Earthell and I are hoping to hit a home run ourselves and are mailing copies to people who might be interested in a story about two young girls who were abducted by a traveling evangelist.

If you have read Salvation, THANK YOU! Special thanks to those cheerleaders among you who have who have recommended it to others, and have been so kind as to leave a review on Goodreads and Amazon. We are so grateful to you for helping to spread the word.

If you haven’t read Salvation yet, what are you doing standing there on the sidelines? Click here and get a copy (or two!).

Remember, books make wonderful Christmas presents, plus they’re super easy to wrap! So while you’re at it, order a copy of Code Name Madeleine, too, the thrilling story about Sufi Princess Noor who worked behind enemy lines as a WWII spy, by my friend and mentor Arthur Magida.

“Noor Inayat Khan is a woman for our age: a true heroine who faced down evil when she saw it and sacrificed her life for the cause of freedom. Arthur Magida’s biography is both a thrilling spy story and a moving portrait of her courage.”
― Amanda Foreman, author of A World on Fire

“With gentle humor and a profound appreciation for the marginalized lives of her characters, Avery Caswell illuminates the America that’s alongside us, and which many of us rarely acknowledge.”