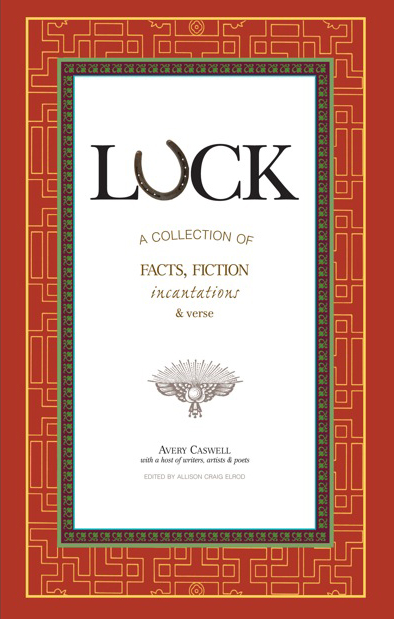 “Luck is a serendipitous feast for the eyes, the intellect, and especially the imagination—prepare to be inspired!”

an excerpt from LUCK (This essay was nominated for a Pushcart)

“You’ve got to ask yourself one question, ‘Do I feel lucky?’
‘Well, do ya, punk?”
—Clint Eastwood in Dirty Harry

Imagine you’re the guy looking down the barrel of Harry Callahan’s gun, heart beating so fast you can scarcely breathe, sweat dripping from every pore, wishing on your lucky stars, hoping against hope the bullet in that .44 Magnum does not meet its target, your brain, racking said target for an escape strategy, making a promise, If You get me out of this, I’ll never lie, cheat, steal, pinch my little sister again.

Nah, you’d rather be Dirty Harry, the guy with the gun, a very big gun, the guy in control of the outcome. Right?

I guess that given the choice, in stressful situations, most would want, if not a literal gun, at least a figurative weapon, one that tilts the balance in his or her favor. We don’t necessarily carry .44 Magnums, but we may carry lucky rocks. A saint medallion may hang from the rear view mirror; a rabbit’s foot may hide in a pocket. Then, should a threatening situation arise, we have something to hang on to, something that is tied to a power greater than ourselves: fate, God, gunpowder, something that controls the outcome.

Controlling the outcome is what luck’s all about. We yearn to believe when there’s nothing we can do to influence the future, luck will be on our side.

Richard Wiseman, head of Perrott-Warrick Research Unit, a psychology research department at the University of Hertfordshire in England, has conducted extensive research into what makes some people lucky and others not so much. Studies at his labs have shown that lucky folks, without even knowing it, think and behave in ways that create good fortune in their lives. Lucky people desire positive outcomes. They expect good fortune.

Unlucky folks tend to dwell on the negative and expect negative results. Consequently, they miss opportunities simply because they’re not looking for them.

Clint, as Dirty Harry, may have it in a nutshell: It’s all in how you feel.