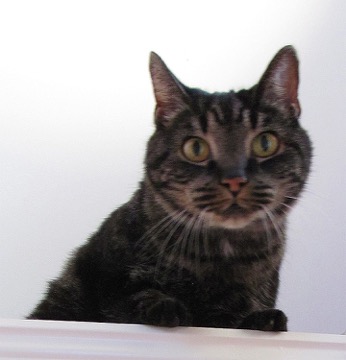 Many Lorimer Press authors recall, most with fondness, the publisher’s feline assistant, Jezebel. She was present at nearly every home office meeting for 17 of her 18 years and our hearts have been heavy since her disappearance Sunday, May 21.

A very social creature, Jezebel was well known and loved by many in Davidson. She was, for many summers, a fixture at the Swimming Hole’s pool deck across the street from her residence. She also enjoyed evening walks, following her dog and her people around the neighborhood at a discreet 10-yard distance.

In her youth, she was an enthusiastic playmate, willing to balance on the tops of doors or be dressed in doll clothes and taken on stroller rides. She grew to be a dedicated and caring nurse, counted on to be a steadfast presence at (or mostly in) the bed of any ailing family member.

Despite her disdain for riding in cars, she liked to curl up and nap in those unwittingly left open, and once spent an entire (snowy) weekend in a Volkswagen around the corner. Her adventurous nature led her to take at least two trips atop vehicles, one heading toward Mooresville’s What-A-Burger, another to the periodontist on Main Street.

Jezebel was well read, always current on current events, claiming as she did the lap of anyone reading the morning newspaper after breakfast. She also enjoyed a bit of television in the evening, being an especially avid fan of BONES.

In her spare time, Jezebel enjoyed hunting. (No mean feat as she had been de-clawed given her preference of climbing the living curtains to reach the second floor.) She often brought her hunting trophies home, primarily voles, an occasional bunny, a very occasional bird, and one copperhead.

One year, on the occasion of her youngest person’s birthday, in lieu of a more typical breakfast in bed, she delivered a freshly caught mouse. (The birthday girl awoke surprised and grateful, but uncertain what to do with the present. Her father swiftly disposed of it.) Jezebel also delivered similar gifts to the porch of her substitute people when her regular ones had the audacity to go away for days at a time.

For all her good habits, and they were many, Jezebel did have one fault. A very vocal character (she was able to clearly articulate the word “milk” and announce “dinner time” in very convincing tones), she could swear worse than any sailor when she perceived that she had not been served at the appointed time.

Jezebel’s home bordered the woods, woods inhabited by many songbirds, an owl, and a murder of crows, as well as deer, rabbits, squirrels, raccoons, and a fox or two. It is likely, at her advanced age, with her hearing greatly diminished, that the huntress, the mighty, beloved, and wholly irreplaceable Jezebel, became the hunted, and thus has vanished from our lives.

Though we are bereft without her, Jezebel will not be forgotten. She took a keen interest in Amelia K. Wyatt’s forthcoming book, Ozzie and the Island (perhaps because the main character is a bird) and made a point to attend every meeting throughout the book’s development. In her acknowledgements Amelia generously cited Jezebel and included this picture of her perched on the office bookshelves. 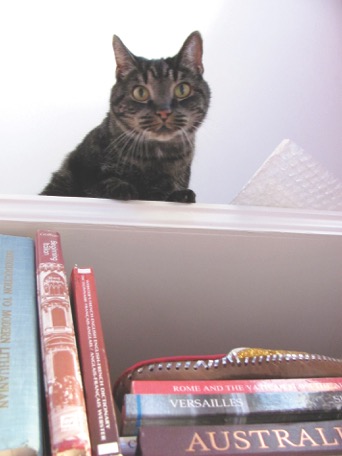