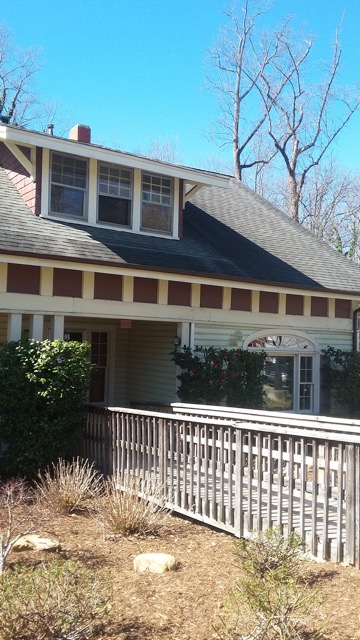 Like many writers, I’ve always loved reading, cutting my teeth on Mrs. Piggle Wiggle and Harriet the Spy, followed by Little Women, which I must have read eight times before sixth grade. I loved Meg, hated Amy, and wanted to be Jo writing in her garret.

That fantasy has been my reality here at Lenoir-Rhyne thanks to The Visiting Writers Series who provide the second floor of a lovely little cottage on 7th Street as lodging for the writer-in-residence. I’ve shared this sunny garret with wasps who have constructed papery condos in the windows, carpenter bees who’ve been busily drilling under the door sill, and a family of brown-headed nuthatches, also industrious drillers, who have built a home by making a hole in the siding, right next door to the bees. The fledgling birds are nearly ready to fly—like we are as this semester ends.

Before packing up to go (and grading all those finals), I want to share what I’ve learned while teaching this term. I’ve learned that writers-in-residence must lack common sense, for the sign on the bathroom door reads: KEEP SHOWER CURTAIN INSIDE THE TUB.

I’ve learned that the security staff who dart around campus in their golf carts are incredibly kind and 100% non-judgmental after this Writer-in-Residence proved the lacking in common sense stereotype by locking herself out not once, but twice.

I’ve learned that ratchet, in the current vernacular, does not mean wrench;
that tasting a green grape for the first time may constitute a creative breakthrough;
that Mozart was a gambler and that we’re the richer for his debts;
that one person’s bad mood can infect eleven others’;
that a handful of unkind words scribbled in haste yield undue power;
that Chinese women, unmarried by age 29, are called Forgotten Women;
that women were the driving force behind key automotive improvements, including: brake pads, car heaters, turn signals, and windshield wipers;
that women invented the syringe, the life raft, and fire escapes;
that the infamous pirate, Captain Kydd, may have been a woman.

I’ve been reminded that the hardest part of writing is often the act of staying seated while pushing a pen across a piece of paper and I thank all the ENG 330.01 writers for the forced opportunity to do so for 20 minutes every Tuesday and Thursday at 10:20. Those free writes allowed me to reach my goal of completing a draft of SALVATION, which I plan to have in an agent’s hands by the end of the year.

I’ve learned that a diehard Christie/Trump supporting New Jersey Italian-Catholic and an equally diehard North Carolina organized religion-eschewing liberal can forge a vibrant friendship;
that chaos and coincidence are necessary components of creativity;
that creativity, while elusive, must be pursued and celebrated as it is the basis for every important advancement ever made by mankind—from Greek tragedy and the Sistine Chapel to penicillin and the microchip.

I’ve learned that one of the best ways to teach is to continue learning;
and that the most important stage of FLOW is the fourth and final (and often forgotten) one: Recovery. Sometimes, it is important and necessary to rest—
so, have a wonderful summer. You’ve earned it.