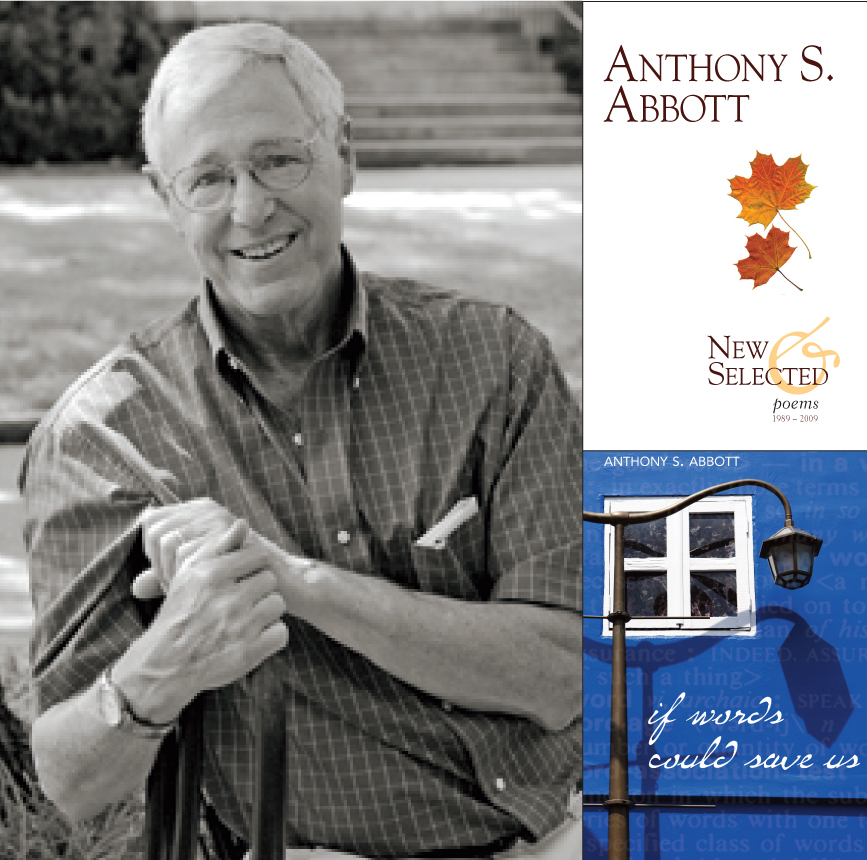 Thirty years ago, Tony Abbott was directing Davidson Community Players’ production of Inherit the Wind and needed a set designer. New to North Carolina, I was a freelance designer with a theatre degree and little else. That play was the first of our collaborations, some theatre-based, but many more book-related, all of which enriched my life—as his neighbor, a designer, an editor, and ultimately as a writer myself.

I designed the cover of his first book, The Girl In the Yellow Raincoat (St. Andrews Press, 1989). Later, I designed the first edition of his autobiographical novel, Leaving Maggie Hope (Novello Festival Press, 2003), and as the book became a perennial favorite, I published, with Lorimer Press, the subsequent second edition and many reprints thereafter. Lorimer went on to publish collections of Tony’s poetry: New and Selected, If Words Could Save Us, and Angel Dialogues, all to great acclaim.

Tony delighted in collaboration, especially when sharing poetry with new audiences. He read poems accompanied by Baroque cello; he stepped into the recording studio so a cd could accompany If Words Could Save Us; he enlisted an artist to depict Gracie, the bridge-playing, Girl Scout cookie-selling, chandelier-swinging angel in Angel Dialogues; then, while promoting the book, he paired with various readers across the state to give Gracie a voice.

In “Blood Talk” he wrote, “I got nothing but goddam words working for me,” but goddam, what he did with them! As N.C. poet laureate Joseph Bathanti said, Tony refused “to flinch or shy away from his spiritual preoccupation intrigues” and he mined with “profundity and lyric intensity that sacred vein—with an imaginative finesse and sense of humor that is at once mystical and accessible.”

Tony’s belief in the power of words—if words could save us (and they can, my darling)—was in full force when he served as volume editor for What Writers Do, a retrospective of Lenoir-Rhyne’s Visiting Writers Series (Lorimer Press, 2011). When he reached out to writers such as Seamus Heaney, Billy Collins, and Ron Rash, they delivered: poems, essays, stories, all which, as Tony said, “celebrate life and language and hope … making us want to be the human beings we were intended to be.” The very definition of his lifelong mission.

How fitting Tony should leave us now. The leaves on his favorite trees, those sugar maples, demand our attention before they loosen their hold and drift away.